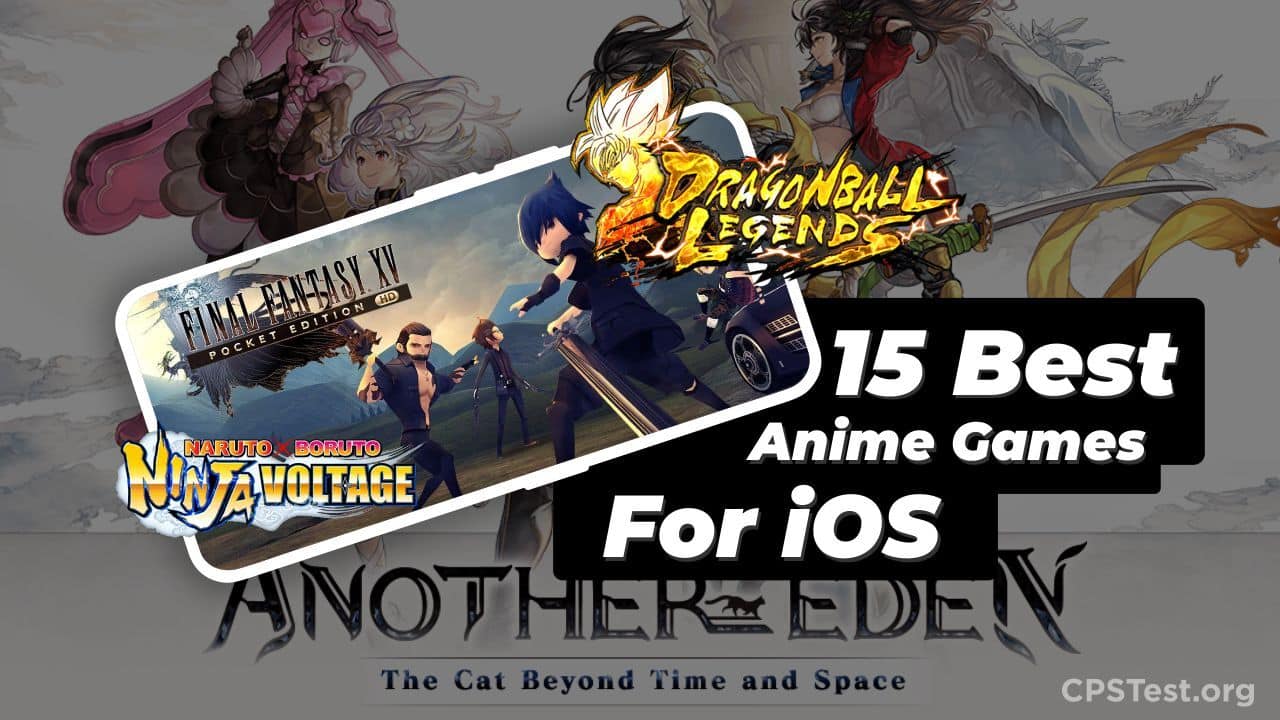 Anime has been one of the fastest-growing genres of this decade. The ideas of the anime gaming industry have been quite popular and have taken the world by storm. Titles such as Naruto, Pokemon, and many more have garnered the interest of young and older audiences.

However, with the ever-growing list of titles based on animes, players will have trouble finding the perfect anime game for themselves.

To help you with your decision-making, we have provided a list of the 15 best anime games for iOS that will enhance your gaming experience by leaps and bounds.

The anime games featured on our list showcase unique plots backed with immersive gameplay and graphics that will enrichen your gaming journey.

Furthermore, each game mentioned in our list contains distinct features and extensive gacha rosters that will appeal to most players.

Another Eden- Editors Choice is a unique game packed with role-playing responsibilities. Players will have to explore and travel between past, present, and future interlinked with each other. The storyline progresses as you interact with prominent characters in the game.

Furthermore, the battles in the game are on turns. It implies that the game would test and challenge your strategies alongside providing a side-scrolling RPG with a 3D environment. It is also crucial to state that the game is lengthy, with over 80 chapters to complete.

So, if you were looking for a game that will keep you occupied for a long period with its unique storyline, Another Eden is here for you.

Any anime game-based list is incomplete without including a game from one of the most popular animes of all time. Naruto X Boruto Ninja Voltage is a fortress strategy-based game where players intend to create a fortress with growing their village.

Players also need to defend themselves from enemy advances. You can also form your team alongside some of the prominent characters of Naruto.

Therefore, if you wish to grow your village with the assistance of your favorite anime personalities, Naruto X Boruto Ninja Voltage would be the game for you.

Next on our list is arguably one of the most ambitious and exciting RPG-based games. Genshin Impact features the world of Tevyat, where travelers must travel through different lands to unravel answers from the seven pantheons of God.

The game combines the elements of immersive and tempting graphics with an elemental combat system to provide a complete experience to the players. If you are looking to explore a vast world full of mysteries, the game would be the perfect title.

If you are a fan of fighting-based anime games, this game should be on your bucket list. Dragon Ball Legends is a unique action-packed RPG game that features prominent characters belonging to the Dragon Ball Z universe. These include manga as well as anime.

Furthermore, Akira Toriyama has also introduced a new character with an appealing backstory. Players play the role of Shallot to assist him in regaining his lost memory. You can also team up with other characters and engage in 1v1 fights using an ideal strategy that requires utmost precision.

It is also crucial to state that the game does not offer an in-game chat feature when playing against players online.

Final Fantasy XV Pocket edition is an action-based game developed by XPEC Entertainment. The game is divided into ten categories or chapters that unlock as the storyline progresses. Players play the role of Noctis Caelum, who embarks on a quest to explore the World of Eos.

The game is easy to play and offers simple mechanics that will appeal to most players. Therefore, if you wish to engage in immersive yet simple gameplay, Final Fantasy XV Pocket Edition is worth a shot.

If you wish to indulge in a multiplayer online-based role-playing game, SwordArtOnline is here for you. The game is an exceptional blend of fun and skill-based gameplay backed by a rich storyline. Players begin their journey in the shoes of a squad imprisoned with other players.

The objective of players is to reach the 100th floor of Aincrad. However, the journey would not be easy as you will face several enemies and complete side quests to progress further in the game.

Each enemy has strengths and weaknesses, which you can exploit for a rich gaming experience. The strategy would be the key here. Therefore, if you are up to the challenge, go on a journey with surprises on every step you take.

Next on our list is a renowned gacha-based game. The Pokemon Masters EX is a role-playing title where players are required to play the role of a Pokemon trainer who intends to catch powerful Pokemon.

Your journey to catch these pokemon will be made better with the assistance of characters like Misty and Brook that are renowned in the Anime world. Therefore, if you wish to experience Pokemon catching, the game would be the right choice for you.

8. One Punch Man, The Strongest

One Punch Man is one of the most popular anime of our times owing to its plot and hilarious story writing. The game has combined these aspects effortlessly and carved out the ideal title for Saitama fans. The title features card-based gameplay that focuses on planning your moves.

The story mode offered in the game features characters from the anime and delivers a rich experience to the players. The game also provides online gameplay where players can take part in PvP tournaments to compete with other players worldwide.

Next on our list is an exciting tactical RPG-based tower defense game developed by Hypergraph. Arknights features gacha gameplay mechanics where players take the role of a member belonging to Rhodes Island, a company fighting deadly infections and unrest.

Players require to place the operators on the right tiles to prevent the enemies from entering their bases. If you wish to experience a casual gaming experience without challenging your reaction times, Arknights would be the perfect title.

The gameplay of Yu-Gi-Oh! Duel Links features the use of trading cards where players have to fight against characters from the anime. However, the game is easy to understand and suitable for beginners.

Progress through the title to build the strongest deck. Players can also complete stage missions that will reward additional perks that will enhance their gameplay experience.

Tales of Crestoria is a combat-style and turn-based game featuring exciting action. The game has been the first venture into the mobile platforms, which has breathed a new spark and excitement into the tales franchise.

The game is ideal for players who wish to experience Japanese RPG-based gameplay with a unique storyline. Therefore, if you intend to engage in combat action, Tales of Crestoria should be the pick.

Fate/ Grand Order is one of the most popular games on our list. The game features a unique storyline with gacha rosters and tempting graphics that gets players hooked. The game is based on a narrative style and infuses a bit of combat element for a slight touch of action.

The game is perfect for beginners as its mechanics as easy to understand. Therefore, if you were looking for a simple anime-based game, Fate/ Grand Order should be on your list.

The Seven Deadly Sins is a cinematic anime-based game offering exciting adventures. The game is an RPG-based game where players need to exploit the skills of the characters to progress into the storyline.

You can also play together with your friends to deal with enemies. The game also features an arena where you can compete against players from around the globe. The game is packed with adventure and is an ideal choice for players wishing to feel the thrill of fights.

Grand Summoners is a pixel-based RPG game packed with intensive fights. Players can summon ancient heroes to assist them in their battles against the threats that can end the world. You can also team up with other players and seek their assistance.

With its tempting graphics and action-packed adventure, the game is one of the best anime-based games and is worth trying.

Last but not least is a game developed by the developers of Genshin Impact. The game features a unique storyline where players control valkyries who are on a mission to protect the world from the Honkai invasion.

The combat system in the game is one of the best in the genre which makes it one of the most promising games on our list. Furthermore, if you wish to enjoy a game backed with quality graphics and a distinct story, Honaki Impact should be on top of your list.

The core animation in Japan is focused on 2D animation. However, there have been many animes developed in 3D too.

2. What Anime Games Are Coming Out?

Code Geass and Demon Slayer: Kimetsu no Yaiba is some of the much-awaited anime games releasing in near future.

Dragon Ball, Naruto, Bleach, and One Piece are collectively referred to as the big 4 anime.

4. Who Is The Best Anime Gamer?

Tatsuya Himekawa is widely regarded as the best anime gamer owing to his reaction speed.

Here were some of the best anime games based on unique storylines and immersive graphics. These games resemble the respective animes and contribute to their growth.

Dragon Ball Legends and Naruto X Boruto will be our top choice as they combine the elements of the most popular animes in the gaming world.

We hope you liked the article.